If you love the single white female rapper Kreayshawn AND you’re a nerd for the old timey video games, boy do I have a treat for you. After a month of hard work on…

Kreayshawn has gotten a lot of buzz for her track ‘Gucci Gucci’ — but now British singer/songwriter Neon Hitch has taken the popular song and given it a slight makeover. Check out…

Kreayshawn Brings the Swag to a Sold-Out SF Crowd

Kreayshawn played to a sold-out crowd at Slim’s in San Francisco on August 25. Even though the show was the third in her seven-stop…

Kreayshawn, Can We Talk About Your “It Sucks to Be White” Quote for a Second?

Oh KREAYSHAWN.  You hipster darling.  I’ll admit, I think you have real potential as a hip-hop artist, no matter what I think of the message of “Gucci, Gucci,” I think your flow and some…

Mood Board: Swag, Individuality, the Unexpected (and Also More Swag) 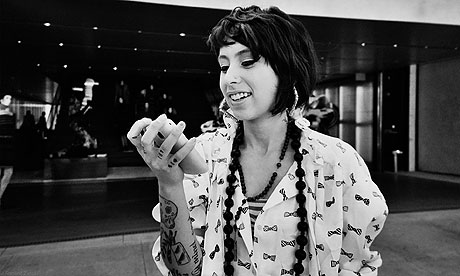 I’m not trying to become a Kreayshawn fangirl blog, I swear. So much is going on with the pint-sized Bay Area rapper these days, it’s hard…

Kreayshawn and Lil Debbie: “We’re Just Kids… Let Us Do What We Want!” (VIDEO)

Kreayshawn and her WGM (White Girl Mob) sister Lil Debbie, talk Bay Area hip-hop, getting recognized on the street, and what they’d do if Gucci sent them free clothes. Check out Kreay’s recent interview with MTV News, too! Check out Lil Debbie’s crazy style in this LIL DEBBIE SWAGGIN GALLERY!!!