New York Fashion Week has taken over the Big Apple and it’s no secret Chanel is an iconic brand that has stood strong against the test of time. Flawless faces have lent their looks to promote it over the years and the double locked C’s is almost too cool to be called a logo. It’s… More »

Closing out an amazing summer that included empowering girls ages 8 to 16 and a third season showcasing designs and designers during New York Fashion Week, Angela Simmons continues to…

NYFW is not just about the designers and the runway. It is a massive production from the celebrities in attendance, the assistants backstage prepping the models before they walk to the epic after parties! Here is a gallery of some celebrities that made their way to NYFW in past years! Who is your favorite?

As you all probably know, New York Fashion Week is in full swing. I had the pelasure of walkiing for Etxeberria yesterday and loved the look they had me rock. Check out more looks from Etxeberria HERE!

New York Fashion Week did not leave us disappointed. We saw a ton of black and white, crop tops, cutouts and throwbacks to the 70s. NYFW also didn’t fail to give us a fun dose of crazy hair and makeup looks. You can get away with a whole lot during this week and the limits… More »

Could One Of These Be Miley Cyrus’ Wedding Dress?

Miley Cyrus has been all over New York Fashion Week. In addition to the Rachel Zoe and Marc Jacobs shows, she stopped by celeb favorite, Marchesa. Miley, 20, was rocking bridal white and talking all about her upcoming nuptials to Liam Hemsworth. Marchesa has designed wedding gowns for some of the biggest stars, including Blake… More »

Miley Cyrus is giving Ashlee Simpson a run for her money as the queen of New York Fashion Week. The 20-year-old starlet made her debut at Fashion Week at Rachel Zoe‘s show in a chic red suit by the designer. Since then, she’s been hitting the streets, and the shows, in edgy ensembles, often featuring… More »

For all the fashion show’s she’s attending, we should expect Ashlee Simpson to be the best dressed celebrity of 2013. The singer, 28, has been spotted all over New York Fashion Week from the Christian Siriano show to a red carpet hosted by Garnier Fructis. Ashlee, who recently released her latest song, “Bat For A… More »

As much as New York Fashion Week is about all the best of American designers debuting their Spring 2013 collections, it’s also about one thousand celebrities coming out to celebrate these designers, all while dressed to the nines themselves. This fashion week, celebs ranging from Kelly Osbourne to Kirsten Dunst to Alexa Chung came out… More »

There’s no doubt that Kendall Jenner is turn and stare gorgeous! The Keeping Up With The Kardashians star may be known to be the shyest of the…

It’s hard to believe New York Fashion Week is over! It went by so fast and now we just have a pretty pictures to remember our week in NYC. Even thogh we didn’t get to go to every show we did want to share our top 100 looks that made our jaws drop! Take a… More »

Suri Cruise better watch out! The stylish tot’s mother, Katie Holmes, is looking to make her own mark in the fashion industry! Tom Cruise‘s ex is reportedly showing her collection, Holmes and Yang,…

Fashion week is upon us (stay tuned for Buzznet coverage!) and what music star is more fashionable than Lady Gaga? The singer, 26, is known for her outrageous outfits, especially her collection…

The Lives And Diets Of Models During Fashion Week (VIDEO)

Buzznet is super stoked to go to New York Fashion Week! To get us ready to watch the amazing fashions come down the runway, we’re checking out what it’s like for the models.…

Lady Gaga Gets Digitally Sliced And Diced For Vogue (VIDEO)

It’s the norm to see Lady Gaga in crazy outfits and accessories that alter her appearance, but Tinsel Town is buzzing over the serious photo shopping done to her on the…

New York Fashion Week is still a couple weeks away, but Buzznet already got a jump start on getting the inside scoop on who and what to watch! We were invited to get an exclusive behind-the-scenes…

Iggy Azalea Will Be Strutting On The Catwalk This Fashion Week

Our current favorite rapstress Iggy Azalea is a triple threat: brainy, beautiful, and totally bad-ass, and judging by the flurry of magazine spreads and awesome outfits she’s been…

Will You Watch? Katie Holmes Will Present At NYFW! 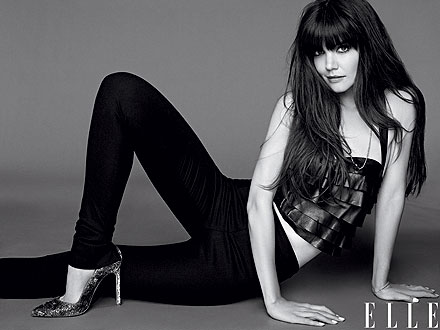 Despite of her high-profile divorce from Tom Cruise, we’re pretty sure Katie Holmes wouldn’t mind all eyes on her latest fashion project. The 33-year-old actress has been…

The models walked the runway to the Tokio Hotel-Songs “Für Immer Jetzt”, “Sonnensystem” and “Lass Uns Laufen” at the Y-3 Spring/Summer 2012 Fashionshow of Yohji Yamamoto at New York Fashion Week! Bill and Tom wore already at the photoshooting for WWD FOR JAPAN in Tokyo in February 2011 the fashion of the Japanese designer Yohji… More »