I believe that you heard of the Finnish power metal band from Kemi. I was so lucky to interview Henrik from Sonata Arctica, one of the best bands in history. Don’t wait and check out this great interview. 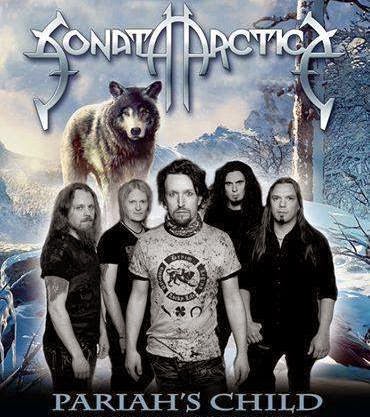 You released “Ecliptica: Revisited; 15th Anniversary Edition” in October. What does it mean to you to have your first album re-recorded? Henrik: For us this was a kind of tribute to the album that started this journey. We’re not trying to replace the old one but merely show how it would sound if we’d do it today with the current line-up.

Sonata Arctica songs tend to be powerful, strong and everyone can discover a part of themselves in them. What inspires your writing? Henrik: I can’t speak for Tony here but personally I can get inspiration for a song from almost anything, traveling, books, movies, music and what not….life itself usually provides enough different things to keep one inspired to make music.

What is the best thing about being in the spotlight? And what is the worst thing?Henrik: The best thing is that we’re able to play music for a living and I do enjoy playing live in front of larger or smaller crowds. Since we live in the middle of nowhere nobody really pays attetion to us when we’re back home so I don’t really see any major downside of being known, it’s all part of the job. I’m happy that in our case the focus is always on the music which makes it a lot easier for the band.

How would you describe the song “I Have A Right”? Henrik: It was the last song recorded for the Stones Grow Her Name album, we where already done with the recording for the drums when Tony came up with this one….and it became the first single. I think it’s a very emotional and deep song. It turned out really great.

What is your scariest experience from concert tour? Henrik: Apart from turbulence during flights ? Tommy almost fell from the balcony once, that was a bit rattling but we haven’t really had that many scary experiences…and I like to keep it that way.

What do you think about today’s music industry? Henrik: It’s very hard for the bands to make a living these days and the business is in a somewhat chaotic state right now…we’ll see what the future brings but right now all we can do is work hard and hope for the best.

We can’t wait for the upcoming concerts in Poland in May. What can we expect from Sonata Arctica shows? Henrik: In May the concept will be really special since we’re gonna play the whole Ecliptica album live…this is definitely a once in a lifetime experience. We’ll of course play some other songs as well but Ecliptica will be the main focus.

Thank you so much. Do you have a message for your fans and readers? Henrik: Support your band, keep the spirit alive and all that jazz…