When I say “Hugh Jackman Holding Things,” I mostly mean my heart, because he has it. Well, not really. That would be weird and I would dead, probably. Do you all remember when I wrote about how I was in LURVE with Anderson Cooper? I still am, so don’t you worry, AC. I know you would be CRUSHED if I ever stopped not paying attention to whatever you are talking about on the tube as I gaze into your eyes and imagine our future together.

And so here we are, on the shores of another vast ocean of a blog, getting ready to leave AC Island and set sail into the open, muscular arms of Hugh Jackman. We cannot be tamed. The heart wants what it wants. Put on your life preservers because the Seas of Hugh are tumultuous.

He really is a Hugh Jackman of all trades (yeah I went there). He can dance, sing, and do a lot of other stuff that I can’t because I am round, awkard, and shy. I am not going to get into a a lot of facts because

Les Miserables – He’s in it. You’re going to watch it. AND YOU’RE GOING TO CRY

Le last minute of this trailer is going to make all of your feels happen all at once and it’s glorious. I am pretty much excited for this because it’s

a) a musicalb) full of Hugh

So let’s get this party started. Have fun doing a scroll and here is a gif that is not Hugh related to get this ball a rollin’

~ I give to you Hugh Jackman Holding Things ~ Hugh Jackman holding a banaynay and feeding some preshuz bb 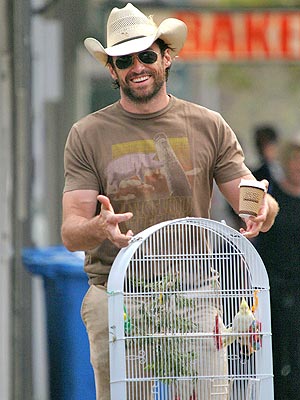 Hugh Jackman holding ponies – Who knew he was a Brony? And there you have it. Feel free to post anything Hugh related and keep this party going. TTFN!