THIS ARTIST IS SO MUCH TALENTED: NICOLE BOGGS

Today’s world gives to us so many an amazing artists.Unfortunately, not always we can to met their.And this is a reason my new section on Buzznet: This artis is so much talented.In every week I’ll try to show you great artists.

The first artist is so beautiful and fantastic Nicole Boggs. She is a singer with an incredible voice from Denver(Colorado). Now she lives in Nashville. 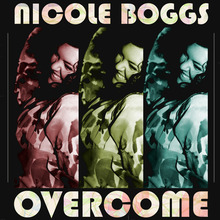 In her music you can to hear many strong emotions. Nicole’s music it unique mix of soul, jazz, pop, R&B and funk. She works on “Overcome” project right now 🙂

I hope that her music will can change people. She deserves to big success because not every an singer is so creative and talented like she 🙂

I found special for you her biography:

Nicole studied at the acclaimed Berklee College of Music, and has had the pleasure of sharing the stage with artists including Josh Groban, Me’shell Ndegeocello, Siedah Garrett, Joyce Kennedy, Cindy Blackman and Beth Hart, who she credits as being one of her greatest influences. Nicole recalls, “I was so excited for Beth Hart to be playing in Nashville. I bought my ticket well in advance, and then the day of the show, I was getting ready to head to the venue when I got a phone call asking if I would be interested in opening for Beth that night. At first, I thought it was a joke! Of course I said YES, then I was told I my set was in a hour! I didn’t even have time to be nervous, and luckily, I made it and the show was amazing!”

In 2008, she had recordings of 2 songs from a collection of early demos released on a compilation featuring Amy Winehouse, Duffy and Ayo on the AUR label. More recently, Nicole has been laying the footwork in preparation for recording her first studio album. She has been diligently writing with a network of phenomenal songwriters and musicians in order to create a collection of songs that truly showcase her abilities and exactly who she is as an artist.

“Nicole Boggs is a rising star. With honest, direct songwriting and a soulful voice that grabs you immediately, she is a talent we’ll all be hearing about soon.”-David Cook, Music Director for Taylor Swift

“Nicole Boggs is one of those rare talents that captures a youthful and old soul sound at the same time. The world is about to receive a great musical gift””–Scott Van Zen, Producer, Songwriter, Guitarist Extraordinaire

Do you wanna know more about Nicole???