If you know anything about me, it is that I love all things Avatar: The Last Airbender. If you don’t know anything about the Avatar universe, you are missing out on things like flying bison named Appa and all the adventure that comes with saving the world from Fire Lord Ozai with a team of element benders, a non bender, and a flying lemur named Momo.

Since the first Avatar series has long been over, the fine folks over at Nickelodeon have graced us with a new adventure, The Legend of Korra. This weekend, at Comic Con, I managed to finagle myself some time to chat with the cast of this fine show and it was more than I could’ve hoped for.

If you’re ready to dig deeper than a badger mole into the world of The Legend of Korra, you’ve come to right place. Without any further adieu, here’s what the new Team Avatar had to say about their time in Republic City thus far!

Me: Hey Team Avatar! (I’m bad at interviews, please forgive me). First, I wanted to know how far in advance did you receive your scripts. Was anything about the story revealed to you in advance?

Janet Varney (Korra): No. We definitely don’t know anything before we record. We receive our scripts only a few days before.

Me: Does this affect how you react to how the story develops?

P.J. Byrne (Bolin): Sort of but I think that works well because were excited to see what happens. We are immediately learning about the story and our passion comes out when we’re reading a character.

Me: Was there anything in the storyline that took you by surprise? Anything unexpected?

Seychelle Gabriel (Asami): My father turning to the dark side. To turn against him was a big surprise for me.

Me: How did it make you feel that you went against your father to fight with Team Avatar?

Sychelle Gabriel (Asami): It’s a really weird situation to wrap your head around. I mean, she lost her mother and her dad and her had to pull together. To go against him was really difficult.

Me to David Faustino: How do you feel about all the things that went down this season between Mako and Korra?

David Faustino (Mako): I’m a fan of the writing in general. I mean, whenever I get the script, there’s surprises, twists and turns and the flaws that the writers give the characters are amazing. These characters being so flawed is amazing.

Me to P.J. Byrne (Bolin): How do you feel about Korra ending up with your brother?

P.J. Byrne (Bolin): I wasn’t happy with it AT ALL. I still have a real problem with it. If you notice, I’m standing in between them right now to keep that hot flame low. I love her and kind of mad at my brother right now.

Me: How do you think fans reacted to what happened?

P.J. Byrne (Bolin): You mean with my brother takin’ my lady?

David Faustino (Mako): No it’s not.

P.J. Byrne (Bolin): I know that! I’m trying to be cool right now! We’re gonna get in a fight later! 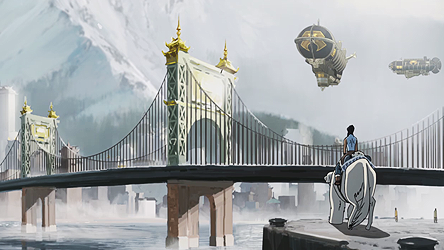 Me: How do you all feel about the diesel/steampunk elements that are incorporated into the Avatar universe?

Whenever we’re recording, I always think, “God, I wish I could walk around Republic City!” That seems like it would be so amazing. I could eat some noodles, listen to some music, and hopefully avoid getting beaten up by people!

P.J. Byrne (Bolin): I think it’s kinda cool. We get to play in the parameters of the Avatar world. Just look at the cars we get to drive the airplanes, I mean there’s no jets but..

P.J. Byrne (Bolin): Yeah! The Blimps! I think as the world and time go on, new things will happen but I think it’s cool to have these technological constraints. It’s an extra conflict that we have to play against.

Me: Speaking of constraints, one of the criticisms the show received was it’s pacing and how fast the story developed, almost as if you were working against a time constraint. How do you feel about how the story progressed over the whole season?

Janet Varney (Korra): Well, I think it does move very fast. I think the way that the characters develop and how the story develops really makes it feel cinematic in some ways. We had a 12 episode story arc so we had to just hit you hard. I think that keeps it super exciting.

P.J. Byrne (Bolin): Actually, I think that makes the show a success, to be honest with you. You can tune in each week and you get slammed on this roller coaster of new information, new action, and new relationships. I think that’s why people kept tuning in.

Me: How did dealing with some very adult themes on what’s largely thought of as a kid’s show make you all feel?

Seychelle Gabriel (Asami): I think it’s done really well and really responsibly. It’s nothing too crazy, ya know? It’s almost historical, in a way, how they pull out these themes and present them. I think it’s really smart for young people to see stuff like this and root for the people being victimized.

What I think is really cool is that our team isn’t only benders. My character is a non bender so they aren’t biased in any way. They’re just fighting for both sides, for what’s right.

Me: Cool! Okay, last question: If you could bring anything from the Avatar universe into the real world, what would it be?

Me: You’d rather pull a noodle through your nose than hang out with Pabu?!

Janet Varney (Korra): Youd rather have noodles instead of Pabu? I’d bust out Naga!

David Faustino (Mako): I just want to bend fire. You know, it’d be cool to throw some fire to a couple of old agents, the ex wife.. (everyone laughs)

Seychelle Gabriel (Asami): I’d bring out the music! If I could fill up my iPod with the music from Republic City, I’d do that!

Me: Thanks so much, Team Avatar!

This is my first interview ever and I was a nervous wreck. They were all really nice to me. Sorry for the bad pics but we were literally wedged between a massive crowd and giant Teenage Mutant Ninja Turtle statues. Thanks for reading!