This year’s Kids Choice Awards are shaping up to be the biggest and most slime filled show of the year! As the big event quickly approaches, huge announcements are being made about who will be walking the orange carpet and taking the stage at USC’s Galen Center.

Just yesterday it was announced a certain blue haired pop diva will be in for a special performance! Drum roll please… 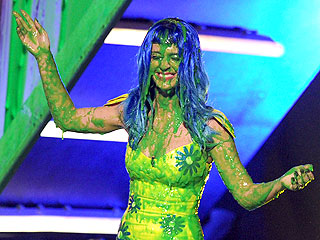 It’s Katy Perry! Who else has blue hair? haha! Will she dye it green for the slimy occasion? Additionally, British boy band sensation One Directionwill return stateside to perform at the KCAs, just one of many future Nickelodeon appearances to come. After a recent appearance on iCarly, it was revealed that the group will be getting their very own Nick show!

Are you excited for any of these performances and appearances? Will you be watching?