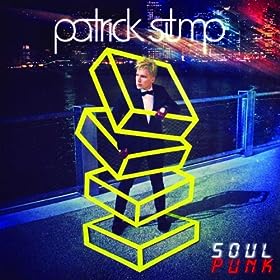 Today, there was finally an official pre-order announcement for Soul Punk. Hallelujah! After various copies hovering around Amazon (which had originally slated September for a release date) but no official word from the man himself, I was beginning to fear that there had been further set backs. However, today Patrick Stump tweeted to announce that pre-orders were available on iTunes worldwide – and therefore everything is all systems go. Yippee!

Normally this would mean two things; one: you could pre-order the album, obviously, two: it would mean that you could preview every track for 30 seconds. Unfortunately, the ‘preview all’ button has been disabled on iTunes – “oh no, he didn’t!” (I’m afraid he did).

However, fear not as there has in fact been previews on Amazon for a few days now. I know, I know before you say “WHAT!?”, I missed them initially too. Unfortunately the deluxe version has been sans previews there too but the standard version has slipped through the net, so whilst you may not be able to aquaint yourself with tracks like ‘Mad At Nothing’ (and will have to make do with my Track-To-Track Guide with predictions etc), you can get familiar with other new songs like ‘Run Dry (X Heart X Fingers)’ (which is 13 minutes long!?). Exciting eh?

So what do they sound like? Well go on and listen to them here already! The preview clip which stands out for me is the (as much as I hate musical comparisons) Prince-like The “I” In Lie. I think that’s going to be climbing my most played rank very quickly.

On another note, one surprising (but definitely welcome) addition is the bonus track of Saturday Night Again which was originally thought as exclusive to the Download to Donate: Tsunami Relief collection and which then turned up as the vinyl-only B-Side to “This City”, and now has been added to a bonus deluxe track. Interestingly, it was also left off of the initial track-listings. You can listen to that in full below:

If you’re like me (aka ‘old-fashioned’) and are desperate for a hard copy either on vinyl or CD, there’ll be a deluxe package with a signed lithograph coming soon. Exciting times.

Oh and as always, I shall finish on “Where is Cryptozoology?”.

So who else is counting down the days to October 18th?

UPDATE: When Patrick Stump announced that there would be a special pre-order ‘soon’, I didn’t anticipate that it would be same-day soon. Now the CD and Lithograph bundle has been announced as ‘live’ online now on the webstore. Oh and if you’re quick and order within the first 250, you’ll get your lithograph signed not only by Patrick Stump but also the lithographic’s designer Roland Tamayo. There’s still no sign of a vinyl pre-order however knowing that this is Patrick Stump, you’ll be able to play it on your record player soon I’m sure.

OH and what’s more, and being kept on the low is that there is a competition for all those who pre-order a copy of Soul Punk. What’s the prize? A re-recorded version of “Allie” with your name inserted in the song. *cue crazy fangirl squeals*