Buzz Guide: The Happy Unfortunate, A Moment of Cute, and Shadows Of A Fleeting World

Since it’s our job to be on the internet all day, the least we can do is share its treasures with you, right? Take a magical journey with your friendly Buzz Guides as we sift through the nose that is the internet and pick the biggest winners that won’t come off their fingers. I don’t know if le Hip Hop is anything you listen to but if you are anything like Aviva (who blasts some “Black & Yellow” out her giant earphones like she’s bangin’ the block), then this group is for you.

No Time To Sleep is the latest from The Happy Unfortunate. It’s available for download by donation, which is um, kind of F-ing rad. They have some of their songs streaming on their Tumblr.

My brief and probably wrong summation of their sound is this: Imagine if Nujabes had a baby with A Tribe Called Quest in 2011. Yeah. It’s kind of like that.

I’m probably going to get fired for saying this but: Well, I don’t like posting there. I just like looking at all the stuff that people reblog and so on and so forth. I’m probably stalking you there already. Anyway, this is my fave blog to lurk: 10>110>101 is basically a blog about Los Angeles. There are a TON of historical photos of Los Angeles when it wasn’t one great, big, festering, neon distraction.

Shadows of a Fleeting World

This book/art exhibit is an archival look at the photos taken by members of the Seattle Camera Club. Let me bring you some realness. I have never seen this show. You know what? I am currently S.N.G.A.F.

All I know is that whenever this show is on, my Twitter feed EXPLODES and all my peeps are talking about the craziness going on in the episode.

Whenever people can galvanize their forces under false eyelashes and glitter, I am all for it. This show is OVAH. That’s all I got to say. 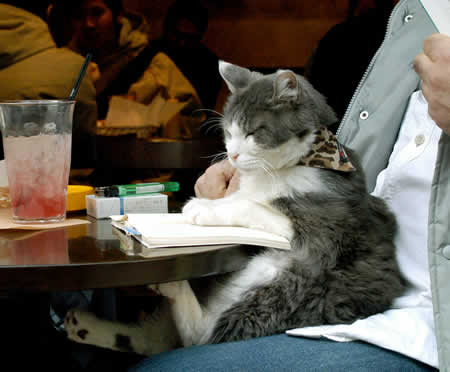 That’s all I got. Happeh Caturday!

Stay tuned for another snazzy Buzz Guide next week!